ISLAMABAD: US Secretary of State Rex Tillerson got a frosty welcome to Pakistan Tuesday after Washington turned up the heat on Islamabad for allegedly providing “safe havens” for Taliban militants.

America s top diplomat was quietly greeted by a mid-level Pakistani Foreign Office official at the military airport in the garrison city of Rawalpindi, an AFP photographer saw – a welcome devoid of the pomp that usually marks high-level visits.

He was then driven in a convoy of Land Cruisers amid tight security to the US embassy in Islamabad s diplomatic enclave, before scheduled meetings with Prime Minister Shahid Khaqan Abbasi and the military chief General Qamar Javed Bajwa and ISI DG.

The secretary s visit, the first to nuclear-armed Pakistan by a senior Trump administration official, comes months after the US President angrily accused Islamabad of harbouring “agents of chaos” who could attack US-led NATO forces in neighbouring Afghanistan.

It follows on the heels of an unannounced stop in Afghanistan Monday, where Tillerson reiterated America s commitment to the country and warned that Washington has made “very specific requests” of Pakistan seeking to “undermine the support that the Taliban receives”.

Washington and Kabul have long accused Islamabad of supporting Afghan militant groups including the Taliban. They are believed to have links to Pakistan s shadowy military establishment, which aims to use them as a regional bulwark against arch-nemesis India.

Pakistan has repeatedly denied the charge, insisting it maintains contacts only to try to bring the militants to peace talks.

During his brief visit to Afghanistan s Bagram air base Monday, Tillerson told reporters Pakistan needs to “take a clear-eyed view of the situation that they are confronted with in terms of the number of terrorist organisations that find safe haven inside” the country.

US and Pakistani sources say his visit to Islamabad will be followed later in the year by Defense Secretary Jim Mattis as Trump seeks to send a tough message to the wayward Cold War ally. 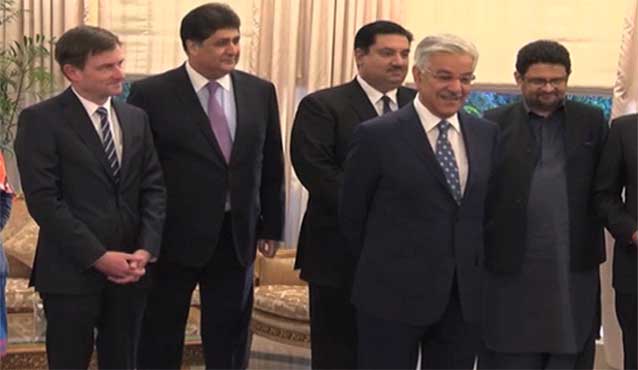 The US-Pakistan relationship has waxed and waned dramatically since Trump took office in January.

Pakistan said the President had praised its then-prime minister Nawaz Sharif as “terrific” in an effusive phone call when Trump took office in January.

But Trump s blistering speech in August accusing Pakistan of harbouring militants saw Islamabad angrily hit back at the claims, insisting the US took no account of the thousands of lives lost and billions spent in fighting extremism.

Following the August speech, Tillerson cautioned Pakistan that it could lose its status as a privileged military ally if it continued providing support to Afghan militant groups.

As one of 16 “Non-NATO Major Allies”, Pakistan benefits from billions of dollars in aid and has access to advanced US military technology banned from other countries.

However political analyst Zahid Hussain said there may be little Islamabad can do at this point to convince the US that it had prevented militants from using its territory to target forces in Afghanistan.

“I think they would like to assure to the Americans that they are sincere and they are taking action against some of the groups,” Hussain told AFP.

“The perception here is whatever they do, it is not going to please the Americans.”

Earlier this month Pakistani forces acting on American intelligence rescued a US-Canadian family which had been in Taliban captivity for five years, sparking hopes that ties were on the mend.

The rescue was followed by a series of drone strikes on both sides of the Afghanistan-Pakistan border targeting long-time foes of both Washington and Islamabad.

The US has vowed to send more than 3,000 additional troops to Afghanistan, on top of the 11,000 already deployed there, to train and advise Afghan troops and police as part of a new strategy outlined by the administration.

Image: GETTY BEIJING – China on Thursday said it “strongly condemns” a statement by the ...