Amir and Faryal officially back together

LONDON: Seems like the trouble in paradise is over! In a ‘kind of’ shocking turn of events, all the drama surrounding Amir Khan and wife Faryal Makhdoom has been put to rest – and this time the news comes directly from the horse’s mouth…

Amir, has officially broken the news on his instagram account, stating that he’s back with his “4 month pregnant wife, after sorting out all the issues. Closing the year with a happy ending”…

He posted a picture with the official patch-up revelation – which featured him with Faryal cuddling together on a couch.

Check it out for yourself:

With my 4 month pregnant wife, after sorting out all the issues. Closing the year with a happy ending 🙏 @faryalmakhdoom

Amir Khan and Faryal Makhdoom’s whirlwind romance could easily be fit for novels.Don’t you think?

After an ugly Twitter row and a surprise pregnancy, Faryal left hints for us too recently that a possible reconciliation is most certainly on the cards.

The 26-year-old took to Instagram to share a picture of Amir and their daughter. While the picture seems to be undated, it’s the caption that caught our attention.

“We’re going to be doing this all over again💖 #parentslove#5monthstogo👶,” wrote Faryal. 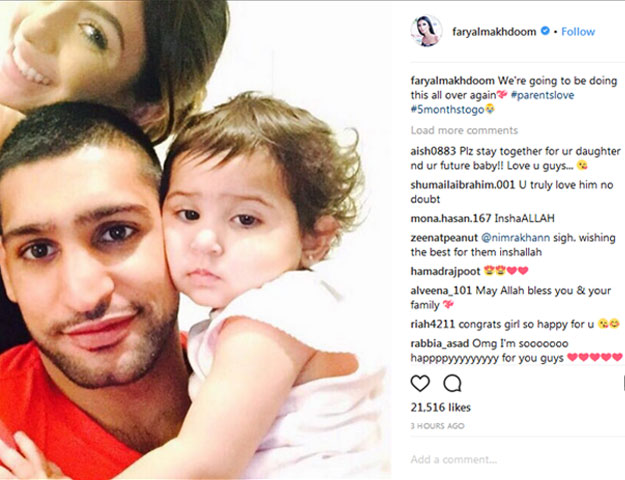 Faryal hinted at a brighter future after months of well-documented acrimony.

Last month Faryal deleted her pleading apology after the boxer appeared to snub her attempted reconciliation. Faryal posted a lengthy message on Twitter saying it is time for her and Khan to put their ‘differences behind us’.

The businesswoman also apologised for all the ‘infighting’ between herself and Amir parents, which she revealed has had a ‘terrible effect’ on her marriage.

But soon afterwards Amir took to Twitter, confirming to fans their divorce would go ahead and wishing her well. Faryal had tweeted the statement of apology to her 180,000 followers just hours after announcing the launch of her own lipstick brand.

She went on to add, “My daughter and unborn child do not deserve a broken home. That is why I have decided that it is time to put our differences behind us, and start afresh.

“All families go through hard times. It is unfortunate for us that our difficulties were played out so publicly. I also apologise for my part in that.”

Glad the ‘hard times’ are behind the couple!

We simply hope that this latest series of events remain consistent and the couple steers clear of any more drama. We wish them well.